Salutations to the Guru.

Recently, senior saint of Sri Ramakrishna Ashrama, Sri Jagadatmanandaji merged to the lotus feet of Guru Sri Ramakrishna Paramahamsa. The book ‘Badukalu Kaliyiri’ (Learn to live) had created a new wave in Kannada literature in the 80’s. With the background of modern science and foundation of spirituality, the book taught how to face life positively, with practical examples. Specially, it is a book of inspiration for youth.

Swami Jagadatmanandaji wrote the book during 1977-80 at Sri Ramakrishna Vidyashala, Mysuru. Fortunately, I was a student there at that time. Swamiji was very near and dear to the students. It is a clear picture in my memory, those days, about 38 years ago, when we were guided by him. His words still reverberate in my ears. This is a small article to offer my salutations to him.

Swamiji was a tall and fit person. His voice was strong. That fluency in Kannada and English, those pearls of Kannada literature that used to spill out of his mouth, that serious tone of voice, the direct eye contact with the audience, clarity in the subject, those jokes cracked by him frequently, the dearness in his language, modulations of voice and concern from his heart – these were some of the features of his speech!

“Swami Vivekananda  has told- each soul is potentially divine. Anyone can achieve the highest, and there are those who have proved it…”, it was his lion-roar. Any heart would have been filled with good emotions, good thoughts and enthusiasm after listening to his words. At the end of his speeches, even the kids who sat negligently bending their heads, would come out brave, highly spirited, as if ready to achieve something. Such was the magnanimous effect of his words!

Swamiji had the responsibility of a ward of students, 6 am’s prayer and the dispensary of the whole school. So, he was also called as Doctor Swamiji. Amidst these, he used to perform his daily japa and meditation and remained concentrated on studying. His table would always have a pile of books. When peeped into his room, he would be found engrossed in writing or reading always. Taking care of the children’s problems, mending those who did mischiefs, attending lectures in Mysuru were his other activities.

While he was a good orator, he used to teach bhajans excellently. Starting with 3 omkaras, the bhajans would end with thoughtful words and meditation. He paid attention that children would actively participate in the bhajans and meditation. He used to teach rhythmic and emotion filled songs which would make us happy. During meditation, he directed our minds through his low voice directions to achieve concentration and giving the mind positive commands. And those words still reverberate in my ears. Swamiji himself would get emotional while he taught songs and would also make us drench in emotions. His collection had songs of some Kannada poets. Kuvempu might be his favourite poet. His speeches and bhajans would have Kuvempu’s lines. Kuvempu’s “Baa.. Sri Gurudevane baa..” was his favourite bhajan. He loved the Devi bhajan “Agnimantra deeksheya kodu..”. We used to sob while hearing the lines of that song. The way he used to teach the song has made it unforgettable in our lives. And the way he shaped the young minds through prayers would make us salute him more and more.
He always told that our minds should never be feeble. Usually we had to sit for meditation at the end of bhajans. A very calm environment prevailed then. When some of the students made funny sounds, Swamiji would say seriously “Can’t you be quiet for two minutes? Where is your mind? Make firm decision that you won’t make noise for two minutes. Don’t even cough. Give instructions to your mind that you would control the cough even if you would feel like coughing. Let me see how would you make sounds then..”. Students listened to his words. The noise would vanish immediately! At the end Swamiji with lots of love, would say “Dear children, your minds have immense power. Utilise it”. Swamiji was such a practical man that he used to prove what he said.

Swamji’s ‘Badukalu Kaliyiri’ book was first published in 1980. The way he wrote the book and the uniqueness of the book are themselves subjects for deep study. There is untiring hard work of Swamiji behind the book. Those who have read the book would have come to know about it. It is not a collection of imaginary stories, events, thoughts or advices; the thousands of events mentioned there are true events. Some of them are science which are results of researches published in science journals. Swamiji has provided proofs for them in the commentaries written below them. Hundreds of events were the reports of national and international newspapers. One can imagine Swamiji’s efforts in searching, collecting and noting them along with his daily routines, that too in an era which had no sophisticated communication mediums as of now!
What is the substratum of the book? Why did it touch common man’s life so much? It is because every thought and event narrated in the book seems to be a part of our daily life. Swamiji has provided solutions to the emotions like anger, jealousy, hatred, fear, disappointment, greed, worries which haunt us every now and then. Moreover he has analysed their reasons scientifically and psychologically. He has talked about their practical solutions and how they are embedded in our religious texts. His language is so good that the serious topics too take us forward in reading just like a comic or thriller novel does.

I read the book many years after I came out of the school. Ironically, I felt that I was already familiar with the contents. The reason was that Swamiji had narrated to us most of the contents of the book in the form of stories, thoughts and sunday lectures. But we seldom knew that Swamiji was preparing for such a great Akshara Yajna!
One Sunday, after the prayers, Swamiji stood up for lecture. There were 3 fruits in his hands. We were curious about it. Swamiji started to throw the fruit and catch it in one hand. Then he started juggling with all the three fruits one after the other, like a circus man does! We were astonished to know when he had learnt this! Swamiji had learnt and demonstrated it to justify his words – “Anything is possible if we make up our mind”. He had practiced many such techniques and showed the students that we too could learn them. Through many such ways, he instilled bravery, confidence and importance of practice in the minds pf children.

Every night when we would get ready to sleep after the bell at 10 o clock, a voice would emerge slowly in the intercoms – “Dear children, do you want stories?” We all would shout together “We want, Swamiji, we want!” It would seem like the roof would fly off for our shouts! Such was an effect of the voice of our beloved doctor Swamiji. Swamiji saw happiness in narrating stories to children. He would not recite the stories of crows and sparrows; rather would narrate the interesting activities of the tribes of some part of the world, the psychological facts discovered by the scientists, the curious ways in which the ships would disappear in the Bermuda triangle, the reincarnation events of those who died in India and took rebirth in other countries, the experiences of psychologists related to after death events. Also, he would provide extra information separately to the ones who were interested.

Swamiji had a motherly heart, a child’s mind and a common man’s simplicity. He not only loved the students but also expected discipline from them. Sometimes when he gave beatings to mend them, he would call them later and tell “I just wanted to give mild beatings. Was it strong? You were not hurt, isn’t it? Dont repeat it my child”. He would day these with a smile and would smear their heads.
While he condemned the ugliness of modern science, he wished that science with good intention and spirituality should go hand in hand. Though he opposed Einstein regarding atom bomb, he appreciated Einstein’s success in demonstrating the power hidden in every atom and his love for India’s spirituality during his last days. He tried to understand the super sensory powers of Edgar Casie. He was also concerned about what Dr. Alexis Carrel (Author of best seller – Man the Unknown ), a Nobel prize awardee proposed : ‘Medical science has not considered the power of the most powerful instrument of humans – the mind’. Swamiji was proactive in finding spiritual truths that may be hidden in the researches of psychologists. He advocated that self-confidence, trust, selfless love, service, prayer for the distressed were the important subjects of human life.

With his blessings and inspiration, lakhs of students of his school have occupied greater positions in the society and are involved in social service too. I feel extremely blessed for spending a part of my childhood with such a great saint, a noble soul and an inspiring source – Sri Jagadatmanandaji. May we have the grace of Swamiji who has dissolved in the lotus feet of Sri Ramakrishna, Sri Vivekananda and Sri Sharada Maata. 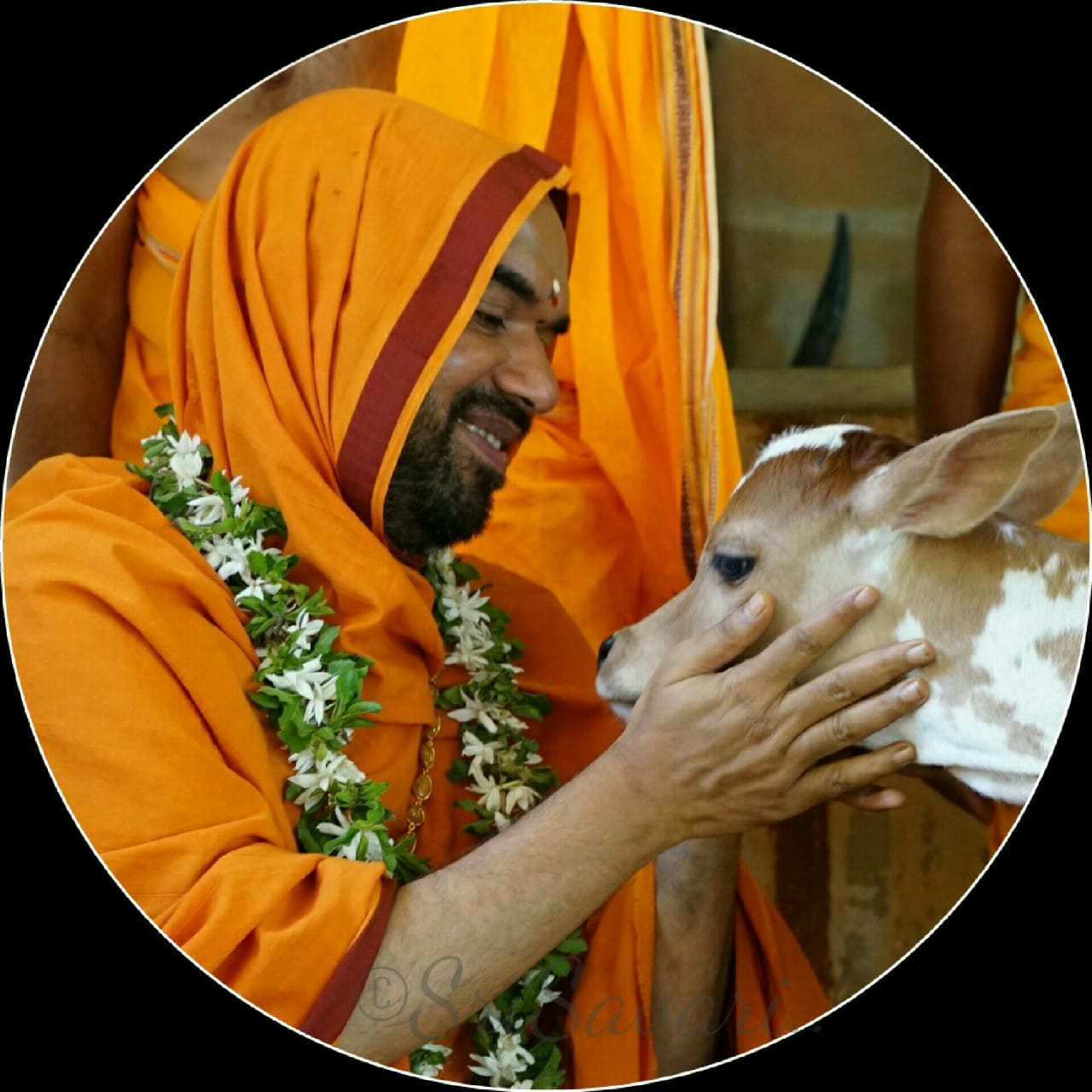 SriMatha as Home, Guru as Mother