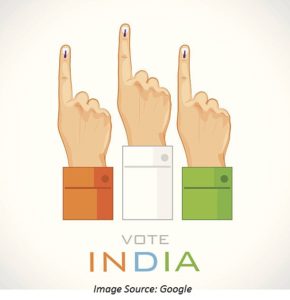 The election in Karnataka is just a day away. A coincidence is that a series of holidays are always associated with the elections in Bengaluru. This time Bengaluru will be voting on the 18th of April, 2019 i.e., tomorrow. Coincidentally, we have a series of holidays during this election too. 17th is a holiday on account of Mahaveer Jayanti and 19th is again a holiday for Good Friday. The voter turnout in Bengaluru for the previous General Election was bad and unexpected for the same reason. However, the situation seems better this time.

From the past few days, I am randomly inquiring people if they are voting this election. I was surprised to know that many are returning from across the country to vote. They are travelling the whole day to vote. This is really a positive growth of responsible citizenship.

Rigorous awareness campaigns are in place to promote voting and educate about its impact. Election Commission (EC) is diligently performing its duties by organising awareness campaigns through Election Commission Ambassadors. A famous Kannada stand up comedian Gangavathi Pranesh, one of the Ambassadors, in a recent program mentioned that he has been travelling across the state from more than a month, attending at least four programs a day to create awareness about polling. Such is the effort made by EC.

All the radio and television channels are constantly advertising about the importance of voting. The other day I was listening to a radio channel and the Radio Jockey was stating that the prizes for the contests would be given post elections in Bengaluru. However, there was a clause that the winner should have voted compulsorily.

Cartoonists, on one hand, are creatively promoting for the citizens to vote without fail; columnists, on the other hand, are trying to make people understand the importance of voting to the nation and to the society. Many short films have been aired to induce the attitude of voting among the masses. Social media messages about various parties and candidates have been spreading like wildfire, but the basic fact that they are promoting people to vote is the matter to be considered here.

The involvement of youth in this election is evidently visible. Not only are the teens going around campaigning, but in many of the areas, they have declared to let tourists inside (on the election day) only after verifying if they have voted. A section of tour operators has introduced criteria of starting the trip on polling days only after the passengers have voted and performed their responsibility. Several lodges in Kodagu and Coorg are providing rooms on election days only to citizens who have voted.

Some regional channels have announced to telecast the photos of inked citizens in order to promote voter turnout in rural areas. Hero MotoCorp has introduced for two-wheeler customers (who cast their votes) an initiative of providing free wash facility, and servicing at Rs.199; valid till two days after polling. All these initiatives are praiseworthy and are towards advancing a higher percentage of voting.

The election in India is not just a day for voting. Instead, it is a festival of democracy. It was first in Gujarat that an innovative concept called Election Tourism originated. Since India is the largest democracy in the world, people are curious to see and understand how it is organized and how it unfolds. Tourists from various countries like the United States come all the way to visit India and see how elections are celebrated in India. A separate wing called Election Tourism India (https://electiontourismindia.com/) at Tourism Development Corporation promotes this package. The tourists are taken to rallies conducted in rural areas, facilities to interact with the national leaders and the voters are provided to make them understand in depth the festival of democracy.

When the whole world waits to witness the biggest democracy of the world, the success, and failure of a country lie on our small shoulders. We can play justice to this by voting. Let us not waste a vote, let us not crib the next five years, let us not lament for the wrong choice.

Are you also a PUBG player?