As a promotion for the iconic Second World Havyaka Conference that is to be held in Palace Grounds in Bengaluru from December 28th to 30th and Amruta Mahotsava programme of Akhila Havyaka Mahasabha Awareness Walk (walkathon) was held in Malleshwaram.

Famous film actor Sri Ajay Rao inaugurated the walk and spoke. he said, Havyaka culture is special, to introduce the heritage and specialities of this culture World Havyaka Conference is organised from December 28th to 30th. These conferences are essential to preserve our culture. He also mentioned that he will be attending the conference and called out the citizens to attend it.

The local corporator Sri Manjunath Raju was also present and spoke on this occasion. He said, great programmes have been organised by the Mahasabha. He extended his cooperation to the conference and wished the programme a great success.

The president of the Akhila Havyaka Mahasabha, Dr. Giridhar Kaje gave information about the world Havyaka conference and said that this was the right time to introduce our community’s unique culture and heritage to the world. The Havyakas’ food is popular as traditional food, ‘Havyaka Paakotsava’ is organised that showcases the traditional food from Malenaadu-Karaavali regions. Many village specialities including Aalemane, complete display of Areca crop, conferences regarding the happenings of the society, music – dance glory, yakshagaana, acting performances and many more unique programmes are a part of this conference. Let’s inform all the people about it and bring them to the programme. To inform the people about this programme this walkathon was held, he said.

Awareness walk which was organised in collaboration with Malleshwaram Sports Foundation and Reshape Nation started at 6.30 in the morning and went through Margosa road, Sampige Road, Malleshwaram circle and many other places and was concluded at the premises of Havyaka Mahasabha. About 500 people participated in this walk which was about 5km long including many elites of Malleshwaram, directors, well wishers and members of the Mahasabha.

What did the Gou lovers do for the sake of fodder for Gous? 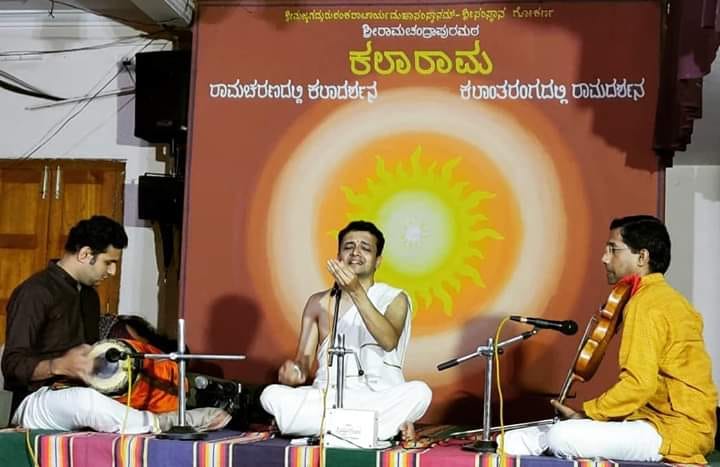 A musical offering in Ramashrama